Keanu Reeves, 50, is no stranger to playing the badass in a movie — think Point Break, John Wick and The Matrix. But in the trailer for his new movie Knock Knock, Keanu gets more than he bargained for when he lets two sexy girls into his house. I should probably mention that the girls are straight-up bonkers!

Keanu plays the happily married Evan Webber in Knock Knock. While his wife and kids are away for the weekend, Evan gets a late night visit from two hot girls, who turn up at his home soaking wet from a storm and ask to use his phone.

And that’s when the anarchy starts! After helping them, the girls try to seduce Evan. He tells them he can’t do anything because he’s married, but in the trailer we see that he (maybe) succumbs to their charms, and they all end up together in bed.

What happens next is well… I’ll let the trailer explain: 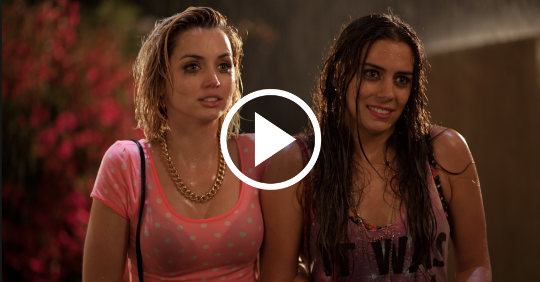